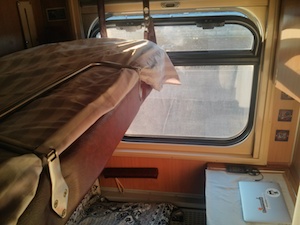 The next leg of the journey was a long slog from Vienna to L’viv. I took a noon train to Budapest and had to pass some time there for a little while. From Budapest it was an overnight journey with many frequent stops in the middle of the night for immigration and customs. If you’ve ever played Papers, Please, it felt like that. Ukraine isn’t part of the Schengen agreement so you can’t just cross the border without a documents check. Around a few hours from L’viv the attendant asks me about my purpose in Ukraine. She then points at my “ringless” ring finger and smiles. I knew of the Russian/Ukrainian bride thing, but found it crazy that her first guess was for that purpose. I thought it was a hyped up, but after watching a few youtube documentaries about it, I learned it’s sadly alive and well. 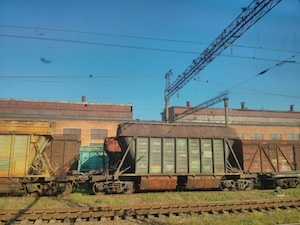 Even with such a long journey the train pretty much arrived on time within a couple minutes. When I exited the train I immediately could recognize my cousin Lilia. She ran up to me and gave me a proper family style hug. Looks like I’m home! We took a bus to her home in the Northern part of the city. I was introduced to her roommate, Vitalik. He and I got along really well. He’s a web designer and looks to have a knack for it! Lilia had to go back to work so I unpacked and made myself at home. Later that evening Lilia’s sister, Natalia, arrived by train from Ternopil. She had a huge package of food from her parents and we all enjoyed a feast as I did my best to tell the story of myself and the Myц family Canadian history.

I felt immediately comfortable in L’viv. As Lilia was at work, Vitalik and Natalia guided me around the city. Here are some of the noteworthy places we checked out:

High Castle – On my first day in L’viv I was antsy to go out and explore. I never feel comfortable in a location until I spend at least a whole day walking around exploring and knowing my surroundings. Natalia likes to sleep in (she’s going to kill me), so instead of waiting for her to wake up, I decide to explore L’viv on my own. The high castle name is more of a memory as the castle isn’t there anymore. Getting to the top of the hill was good exercise and rewarded me with a beautiful 360 degree view of the city.

Dim Legend (House of Legend) – There are a collection of restaurants owned by a company that’s doing some interesting setups. Dim Legend has a room for every story (or a story for every room). The restaurant takes the entire building and you can go up to the roof top where there’s patio with a car, and a chimney with a ladder so that you can climb to the top. There’s something refreshing about being in a country that doesn’t have the same restrictive safety regulations of most western countries.

Rynok Square – Like most Eastern European cities, L’viv has a beautiful (albeit touristy) city square. You’ll find the “floating” statue people and dudes making giant bubbles. Overall though, the atmosphere is quaint and relaxing. Ukrainian culture is inviting so it’s pretty hard to feel like you’re too far out of place. This is probably where I spent the most time as all the coffee shops and restaurants are all near this location.

Lviv chocolate – One of the most unique experiences I had in L’viv was drinking melted chocolate flavoured with a whole whack load of chili powder! This place was not good for any thought about losing weight. Not sure how everyone here stays so fit! At least I was getting a lot of walking in, but not sure if it’s enough for all the sweets I’ve been having. 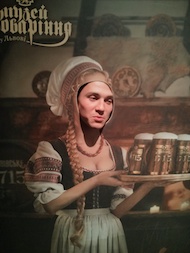 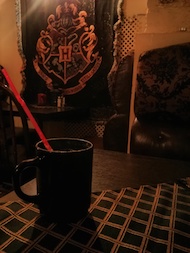 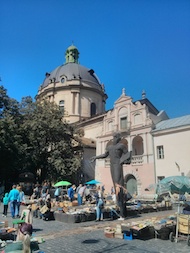 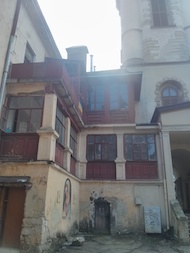 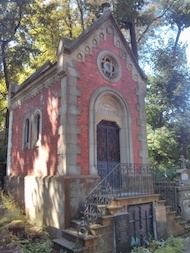 L’viv is a city rich in culture, architecture, and friendly people. It’s accessible with its 120 year old tram system, but remember to punch your ticket yourself (pictures to the left) and has all the things you need as a traveler. The city is sort of a dream land for me. It has excellent beer, chocolate, coffee, books, and food. The people are friendly and accomodating, I can’t wait to be back! 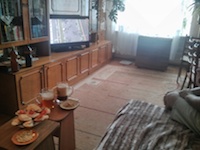 For the weekend, Lillia had planned a trip to Ternopil to visit her parents and other relatives. Apparently they don’t get many foreigners on the train and the attendant on the train made an effort to ask if I wanted tea or coffee in English. He sort of chuckled and so did my cousins, not sure why. We took a bus from the train station to the outer area of Ternopil where Lilias’s parents live. It was a classic pre 90’s looking apartment block. The door opens to their apartment and I’m welcomed with a feast on the table! Lilia’s parents didn’t speak much English so poor Lilia had to spend a lot of time translating (she eventually could tell me whole life story without me having to say a word). The meal started with a shot of vodka. When Ivan offered me another, I replied “tak, bud laska!” (translation: yes, please!). That moment signified me as an authentic family member.

First, I need to digress and talk about Lilia and Natalia’s parents, Ivan and Mariia. They are the sweetest couple and so generous. I loved how they didn’t let the language barrier prevent us from getting to know each other. One of my favourite moments was sitting with Ivan as he showed me pictures and we had a conversation. Lilia was busy packing for the trip back and after she was done she asked what the heck we could possibly talk about. I’m not quite sure myself, but we laughed a lot and didn’t let language stop us from at least trying to communicate. We even enjoyed watching the Belgian GP (and what an awesome race!) with some Ukrainian craft beers. One day I hope to learn more Ukrainian so we can communicate even more the next time we meet.

Mariia could easily be mistaken as a sister of her daughters. She’s actually my cousin (Lilia and Natalia are my 2nd cousins 1st removed) and the family bond was definitely felt. She’s also an amazing cook! The meals included home made: cabbage rolls, varenyky (perogies), shkvarky (pork rind), sour cream, borscht, milk, and juice. I’m pretty sure I gained 5 kilos over those few days. 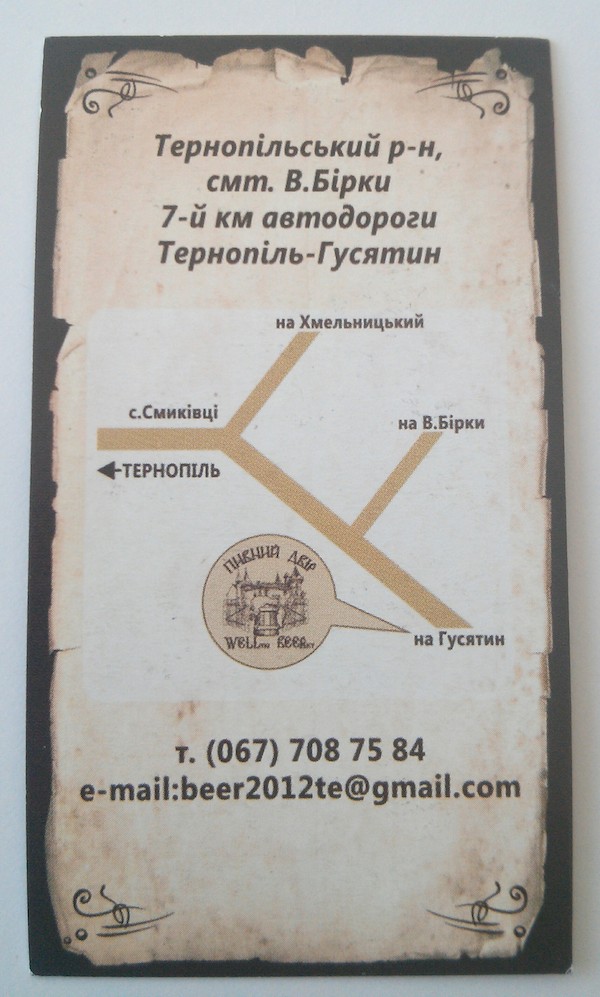 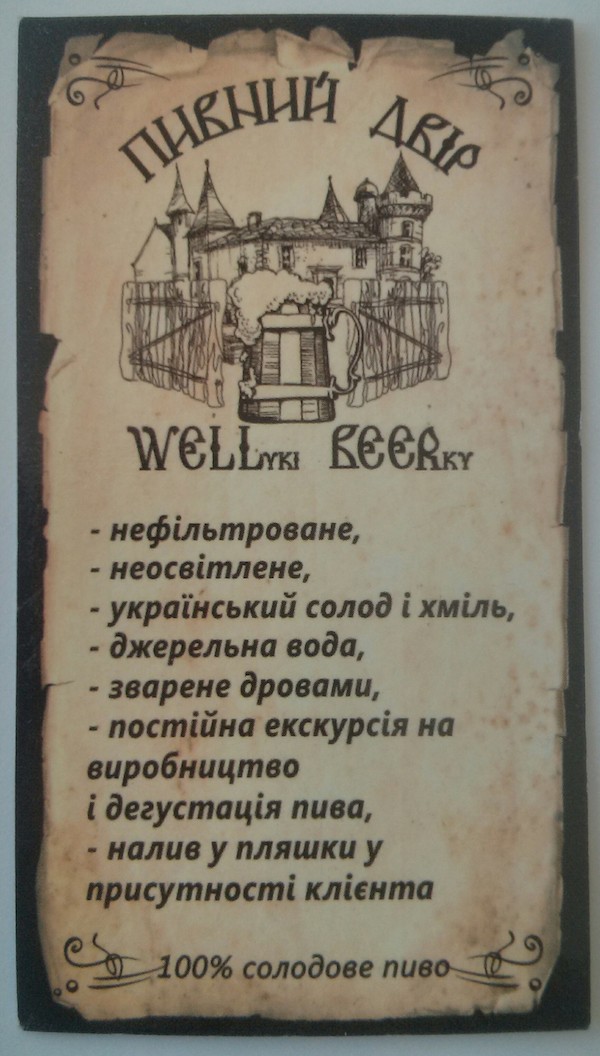 The next day was spent driving to Velyki Birky, a village outside of Ternopil. Our first stop was at Mariia’s parents (Hanna and Fedoz). First we stopped by a house which was a family run brewery (business card pictured). One of the sons of the owner was there and he happily (in excellent English) explained the whole operation. The beer was fresh, un-pasterized, un-filtered, and very tasty. We then arrived and had a big family lunch (with more shots of vodka). Hanna is my dad’s cousin as she is the daughter of Eve Myц who is the sister of Petro Myц, my dad’s father. The meal was of course fantastic and I did my best to update them on my family back in Canada. During the afternoon, Lilia, Natalia, and I walked over to where Hanna’s other children live. Lilia gave her best rendition of my life story and we had fun playing more Q&A with more of my family. One of the big questions was on how Canada was receiving the news about the events going on in Ukraine. Unfortunately I couldn’t quite adequatley answer the question but from a generalized perspective I could say that the West has been pretty weak in it’s response. 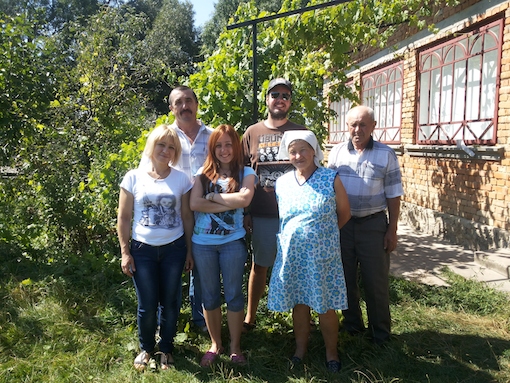 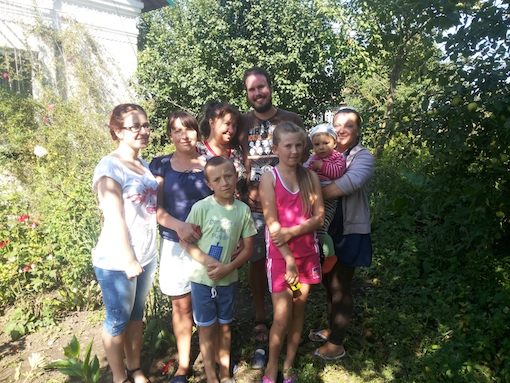 In the evening I went out with the girls to meet up with some of their friends. It was fun introducing them to some of the games I played at TWU (eg: numbers game, and one-up one-down). The next day was a holiday for independence day so we went walking around the city for a bit. The city had some very pretty areas and some interesting looking playgrounds. After our walk we went to the train station (pic: don’t we look like an intimidating group?). 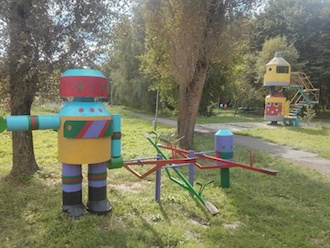 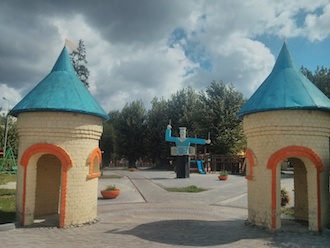 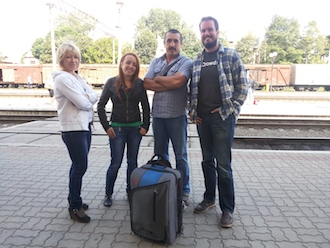 After an amazing weekend we headed back to L’viv. Lilia’s roommate was returning so I had find a place of my own to for a few days. I wasn’t prepared for how much I would miss being in the same place as my cousins and Vitalik (I’m considering him family). I did feel some sense of relief to give Lilia some time without having to worry about entertaining me and it gave me a chance to practice my Ukrainian all on my own. The few days I spent on my own was focused on hanging out in coffee shops and working on a browser plugin. I realized there’s a reason why people smiled when I asked for the wifi password when I hung out at a venue. Trying to be Ukrainian I would say “Internet bud laska”. This is the equivalent of ordering the Internet off of a menu. My cousins got a good laugh from this, and apparently so did all the wait staff I said this to.

Anyways, over a couple days I got the the basic functionality of a plugin working called BlockWorthy. It scrubs links to viral websites and issues you a warning if you happen to go to one of those websites. It felt good to be writing some code and exploring some ideas.

Leaving Ukraine I thought about the bond of family. I had been watching Game of Thrones and seeing how important bloodlines are in that show probably had some affect on me. I was really touched that my cousins would openly accept me into their home and all because we share common ancestry (my great grandfater, their great great grandfather). I didn’t even know who were my cousins were until my aunt in Biggar informed me there are relatives in Ukraine who would love to meet me. The thought about the subconscious bond with family made me think about why we have countries and lines on maps. It’s like a higher level view of the bond. Patriotism is like a larger version of nepotism. I can’t help connect more easily with someone from Canada than I would USA. My bond with my cousins exists because of who my parents are. My ability to nearly walk into any country is simply because of the country I was born in.

What I’m really trying to say is that I’m so freaking lucky to be born into an awesome family and country. Because of these uncontrollable events (on my part), I’ve been afforded so many luxuries.