Remember the woman that I met at the Dream Theater concert? We have kept in touch and she promised to show me around the Hungarian country side! She recommended Balaton Lake area so I found a place to stay in Siófok and worked on scheduling a day to meet up.

Unfortunately the weather did not cooperate as it rained most of the time I was there. On the plus side, I picked up a cold on my way from Ukraine and wasn’t feeling very adventurous anyways. I spent 3 days enjoying the sound of the rain, and watching all of the Harry Potter movies. I picked up some groceries the day I arrived and was able to be pretty self-sufficient.

On the last day my cold was disappearing and the weather outlook was brighter. Just in time for my meet up with Orsolya and a tour of Veszprém and Tihany. Both places had the European charm that I’ve enjoyed so much on this trip. The sun came out while walking around Inner Lake (pic 3 below). Orsolya explained what life is like in rural Hungary and I shared stories of my life. My favourite question was when she asked how I planned my travels. I never really thought about it, but I replied saying that it was just a combination of many little trips. With each little trip I had to plan the transition to the next trip and the opened up opportunities for other little trips.

After the day I was feeling recovered from my cold, and happy to have a new friend. Then I headed back to Budapest to catch a flight to Milano for the last F1 in my travels. 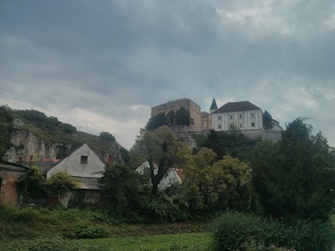 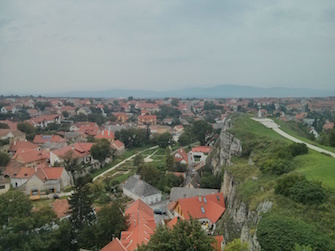 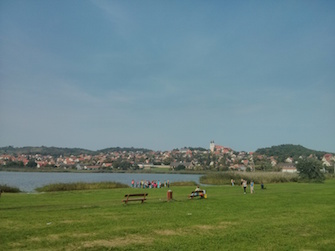 Figured that I could fit one more F1 race in this trip! I used some points to get a free hotel in Milano. The commute to the race track is pretty long so I didn’t really have much time to explore the city. Srini, who went to the British GP with me, got his Shengen visa and was finally able to explore outside of Istanbul and the UK. He couldn’t come to the race but we got to hang out in the evenings when our respective daily activities were done.

At the race track there’s an abundance of people playing versions of the shell game . I watched it for a bit and thought it looked pretty easy. I played once and was absolutely sure of my pick and lost 50 euros. I realized I got scammed and was initially upset. Then I realized why I played the game. I wanted to win some easy money; how was I any different than the perpetrators of the scam? It reminded me that no matter how “good” you try to be, temptation is always there. I thought I could win a quick buck and I was being just as greedy as the scam artists. I laugh at the experience now, and see it as a valuable lesson. I spent some time watching these games and saw all the tricks they play and now understand why it’s called a “confidence game”. I could see ways to “win”, but I would be playing against a person who plays for hours everyday. I think their confidence will win in the long run.

As I alluded to earlier, the commute to my seat was quite long. My record time to my seat was 1 hour and 40 minutes, but it was 2 hours most of the time. One of the nice things about F1 is that they aren’t too strict about what you can bring to the track. Each day I bought food from a local grocery store. Below is a picture of my breakfast on race day (yes beer at 9:00am, don’t judge). Buying from the on track vendors is a complete rip-off. For the price of a couple beers, I was stocked up for the day. 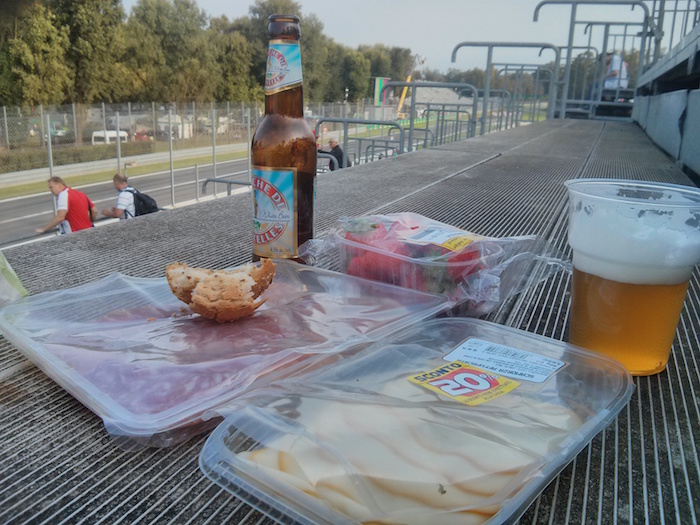 As for the race, the weekend was full of awesome moments. I watched both GP2 and GP3 races, and the F1 race was full of awesome passes. I was sitting at the first turn which is at the end of a very fast straight (circuit diagram). Hopefully this historic track doesn’t close, but I am so happy that I got to experience Monza before anything happens to the event.

Of course my travels wouldn’t be complete without meeting up with Ilias Bartolini, a ThoughtWorker I met when I was in India. He’s on a project in Milano and we caught up over dinner at Maruzzella. Again, a reminder of the network that grew out of working at ThoughtWorks is global and full of such wonderful people. 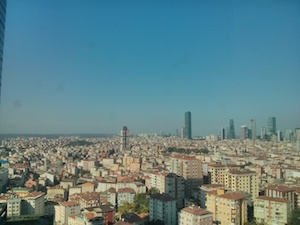 The last leg of my European travels is a stay in Istanbul (not Constantinople). There’s a big ThoughtWorks project there and was able to stay in Srini and Toy’s apartment (picture of the view to the right). I wasn’t sure how long I was going to be there so it was nice to have the flexibility of a ThoughtWorker’s accommodation.

The reason for the uncertain length is that I would be applying for my Indian visa from here. I won’t go into too much detail, but the process was relatively painless. The website is horrible and doesn’t work in all browsers, but once I got my application submitted, the rest of the process was straightforward. In a little over a week I got my visa.

At this point in time I was beginning the interview process for several organizations. Much of my time was spent doing coding exercises and submitting them, or doing calls. I really felt things were going forward and that in some time I’ll actually have figured out where I’ll be living after all of this traveling.

It was a bit of a mini reunion with several people too. I met up with David Simon, who I climbed Kilimanjaro with. There was also a bit of a Calgary reunion where I met up with Isa Goksu who was my roommate for over a year and I probably hadn’t seem him in over 2 years! When I met up with Isa, Cengiz Han was also there, smoking sheesha. He too was in Calgary, usually complaining about the cold, yet both of them talked about how much they miss the Calgary days.

Oh right, I’m in Istanbul! In the slack time, I spent many days wandering around this incredible city. My friend Rose has a picture filled post that better captures the beauty of the city (and of other European cities I’ve visited).

Most of my day trips started out at Taksim Square, which was the space that the Gezi Park Riots took place at in 2013. Taking the metro from where I was staying was easy and efficient. From there I went down Istiklal Street which is a big shopping area. My first stop was Dürümzade which was made famous by Anthony Bordain’s visit. Let’s just say I went there 3 times during my stay! The adana dürüm was one of my favourite meals in Istanbul. The area is a maze of winding hilly streets and I was content to wander this part of the city for a long time. Some days I would hangout at Kronotrop which is an excellent coffee bar. There’s wifi and friendly people who are very open to helping out a tourist with their Turkish. The pictures below are of: Istiklal Street, small street leading to Dürümzade, and outside of Dürümzade. 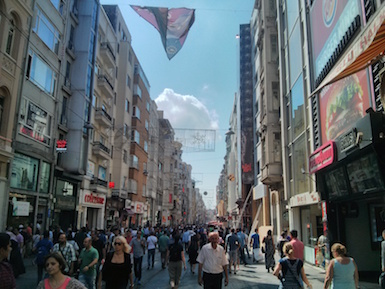 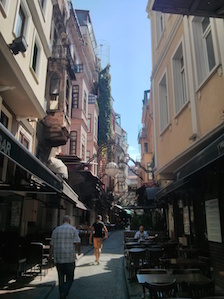 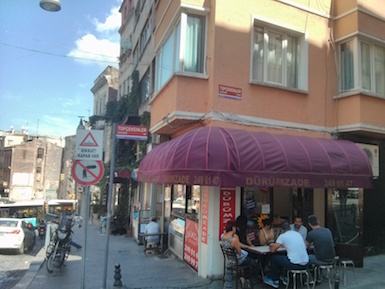 On another day I walk down further and crossed the Galata Bridge and navigated through all the fishermen to the other side (pic 1 below, you can see Galata Tower in the background). Once on Old Istanbul side I follow the meandering alleys in the direction of Hagia Sophia (pic 2 below). How I arrive there I don’t know because the roads go in many different directions and they are very crowded. I kept on having to back track as I took many wrong turns. It was a lot of fun to be lost in the shuffle. Unfortunately I arrived there after the museum was closed so I didn’t get to see inside. Last destination was the Blue Mosque which is probably one of the most famous landmarks (hard to say because there are so many). I was lucky to arrive in between prayer times and was able to go inside. It was so majestic on the inside that I believe I sat there for at least 45 minutes just soaking in the atmosphere. I couldn’t get a decent picture inside with my phone (which has been my only camera on this trip). I did manage to get a decent snap as the sun was getting low on the horizon (pic 3 below). 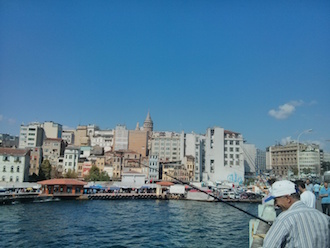 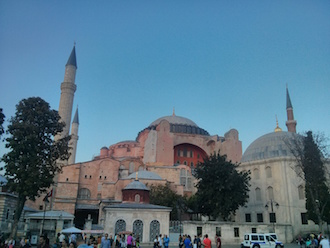 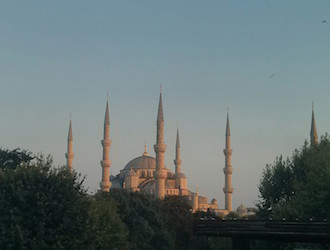 One day walking around beautiful Old Istanbul wasn’t enough so I made another walking tour from Taksim Square. This time, instead of going east to all the great mosques and monuments I kept on going South to the Grand Bazaar. Walking through the bazaar is like being transported in time. I used to think India was a sensory explosion, but this place comes pretty close. It was also a ‘90s time warp as I couldn’t get the following song out of my head:

Never have I felt so immersed in history. I’ve seen some historic places in my travels. The throngs of people that still populate these places made the history feel more alive. At some point I’ll have to go back to Turkey when I’m not quite so traveled out and explore more of the countries beauty and friendly people.

That’s it for my travels in Europe for nearly 3 months. I now have the idea of writing a post about the metrics of this career break. It’ll be a good way to close out the series. But not yet! Now off to India for a few months to hang out with friends, and get re-invigorated about software development.