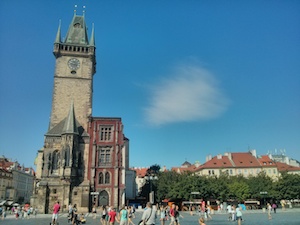 Next portion of the trip is to Eastern Europe! I had a nice simple itinerary to Prague: Heidelberg –> Munich –> Prague. Unfortunately something was going on with the brakes on the train and I missed my train in Munich so it turned into: Heidelberg –> Munich –> Neurberg –> Cheb –> Prague. By now I’m a seasoned itinerary refactorer so this didn’t phase me. These little adjustments of the universe can sometimes end up with interesting things happening. At the Plzen stop, a woman sat across from me in the couchette. She started speaking to me in Czech and my response was the standard Canadian response: I’m sorry?


“I’m sorry?” or “sowry” in the short form is Canadian for: I apologize that I don’t speak your language and I’m embarassed to ask you to repeat yourself in English because I’ve never had to deal with speaking and understanding multiple languages. Of course I’m also making the assumption that you can speak English because a world without English is just unfathomable. Again, I’m sorry

Then in English she said I looked Czech and was just inquiring about the train. Turns out she spoke excellent English, lives in San Diego and was just in the country to visit her family. Eventually we started chit chatting and the conversation about my trip became the focus of interest. I had fun demoing her the cargo ship tour and got some usability feedback as a result. Next thing I knew we were in Prague. Even with my limited social ability to pick up on body language, I think she was flirting with me! In my usual fashion I dropped the ball. We parted ways with a handshake and me wishing her a pleasant visit with her family.

After hitting my head against a wall for what seemed like a decade, I continued on to a rendezvous point in the train station where I was to meet up with Jakub Jareš. He’s a core contributor to Pester, who in the last 6 months, has taken pretty much all the maintenance burden off of my shoulders. He offered to take me out for beers and I obviously couldn’t resist an offer like that. It was the rainiest day of the summer and he guided me to the airbnb where I was to stay for the next couple days. Then we proceeded to a bar (and got soaked in the process). We enjoyed many beers, discussed much about software development, and my ineptness with the woman on the train was soon forgotten.

Sandeman operates in Prague too so I did a couple tours:

Overall, I really enjoyed Prague. You really need to avoid the square as much as possible. Once out of the tourist area, everything is quite afforable and less hectic. Even though my stay was short, I felt that I got the most out of it. I would like to go back and explore further and do some hacking with Jakub though.

My stay was short in Prague because I had to get to Budapest for the last of my Grand Prix adventure. Fortunately it was a direct train! The airbnb was close to the station and was able to take the metro there. I was really happy with the location, and the host was exceptional in responding to my queries. One interesting thing about taking the train around Europe is that you start to see patterns in the train stations from different countries. There was quite a difference between the stations in Czech Republic and Slovakia compared to Germany and Hungary. Now I want to create an archive of train stations so I can do more comparing and contrasting. 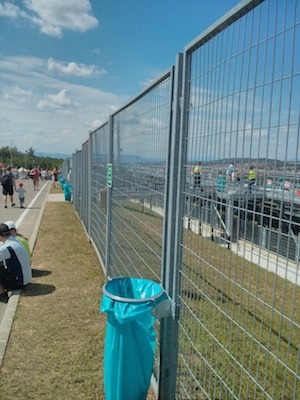 Getting to the race track was a fairly painless experience in Budapest. The transit workers were also extremely helpful and knowledgable about the logistics of the race. The track was located in a beautiful area just outside Budapest. I spent the Friday walking around the track (in 35C weather). The track area was super clean and I think that’s owed to the fact that bright blue garbage bags were never more than 20ft away from you. Overall, I would say this Grand Prix had the most pleasant logistics experience. More importantly though, this was an incredible race! A cloud burst occured around 60 minutes before the race began. All the drivers had to change their strategies and start with wet tyres. Then an accident occured a few laps in that caused some pit lane confusion resulting in the leaders being in the middle of the pack. Nearly every lap had battles going on from all positions. I think this ranks up there as one of the best races of the year (Bahrain was pretty close). I’m sort of sad that my stream of F1 races is over, but also happy because now the rest of my time is entirely unscheduled. Who knows, maybe I’ll do a quick detour to Belgium and go to the race there at the end of the month. 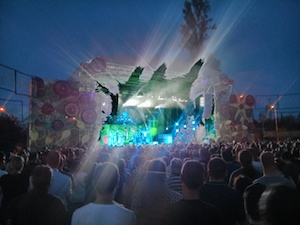 As a bonus I saw posters stating that Dream Theater is playing nearby! I’ve been a fan of them since 1998 and have never seen them live! Everything looked too perfect: the venue was a beautiful tram ride away, it starts after the majority of the F1 events are done, it ended at a decent hour so I could be rested for race day, and tickets were still available! After freshening up after another hot day at the track I walk to the tram and arrive at the venue around an hour before the show starts. I was in line to grab some food when the woman next to me asks me a question in Hungarian. Here we go again! I respond with “I’m sorry?”. She switches to English and asks if I was ahead of her. I had no idea, and it didn’t really matter to me so I said she was first. As I get my food, she asks where I’m from. I tell her I’m going to find some beer and she offers to show me where I can sample some proper Hungarian liquor. I follow her lead and she orders me palinka which is a fruit brandy. Fortunately I’m well adapted to plum whiskey from hazy memories of ThoughtBoarder trips (thanks Radu), so the shot goes down easy. She says she needs to bring the food back to her group and I bid farewell and find a spot in the crowd to watch the show. Ten or fifteen minutes pass and she finds me in the crowd. We continue to chat about music, travel and Hungary. It turns out that her dad brought her to the concert (coolest dad in the world!), and she asked if it was ok to hang out with me during the show (you had to ask?!). You would think that I would have learned my lesson from my previous female encounter… nope. Though I did do a bit better. I wrote down my website and she asked if she could find me on Facebook (I wasn’t sure if my profile was searchable, but I said yes). The show was fantastic and made better by having her company. I got a message from her a few days later and we’re still corresponding! Clearly something supernatural was going on as you can tell from this image of the show. 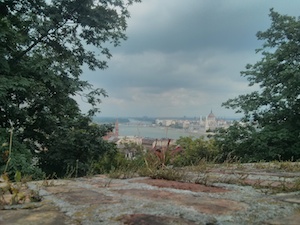 The weather following the race was not so good. I managed to explore a little bit around the vicinity of where I was staying, but spent most of the time catching up with Coursera. Sandeman did not have any presence in Budapest so I took a free tour by another organization. I can’t say it was up to the same standard, but it was still informative nevertheless. It ended near the castle and I enjoyed a relatively rain free walk back to my flat and prepared for my next destination, Rome.