DISCLAIMER Try out at your own risk. This setup is not meant to be copy+paste reusable. It’s about keeping MY workstation under source control, and this strategy may destroy the machine you wish to attempt this on.

Why bother with this for my personal machine? It serves as a good disaster recovery method. Using this automation for the last several years (several laptops + multiple laptop repaves) has given me a lot of confidence that I know what is required to get my machine ready.

There are plenty of tools that help with this process. What I am going to describe is yet another approach, but I hope the simplicity of it will be attractive to those who have struggled trying to get other frameworks to work.

To see what’s included in this tooling take a look at the Inventory. Essentially you get shell configuration, some OSX tweaks, and a bunch of software installed.

My workstation automation is cloned straight into $HOME on a fresh machine. This is a bit different than a lot of the other dotfile repositories you’ll see on GitHub. 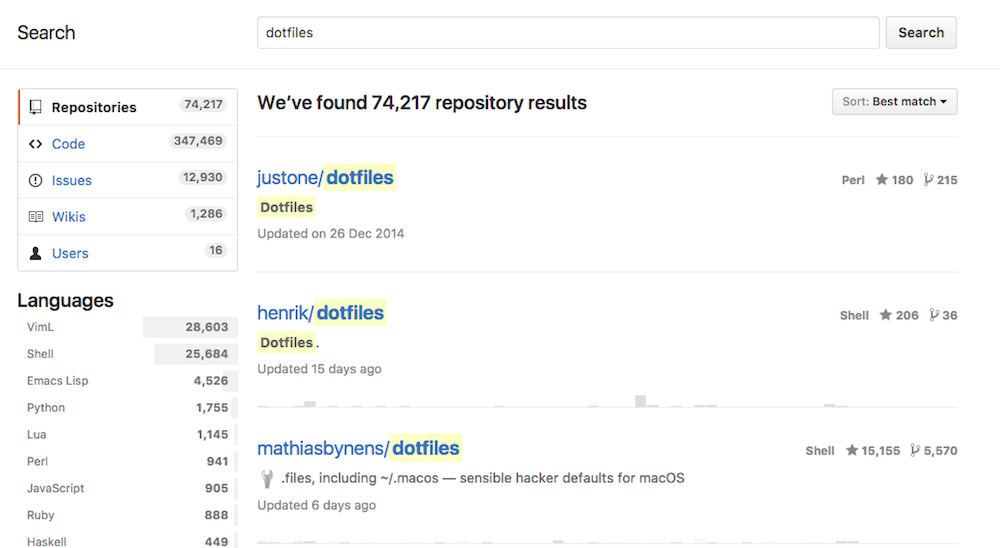 $HOME as a repository was heavily influenced by Gary Bernhardt’s dot files. I really liked the simplicity of not having extra scripting to create a bunch of symlinks. Once you have your home directory cloned, you’re already quite far down the path of having your machine the way you want it. Because it’s a repository, when you delete a file, it goes away and rerunning your setup will not restore that file. It’s inherently an idempotent system!

Another feature I like about Gary’s setup is that uses ~/bin scripts rather than liberal use of aliases in his shell profile. This way you really minimize the configuration of your shell. I personally dislike shell plugin frameworks like bash-it and oh-my-zsh as I believe they add complexity where it really isn’t warranted. Keep things simple and you don’t need frameworks to manage stuff.

That being said, not using a framework is accepting the trade-off of not getting the benefit of community updates. I personally like watching the community for inspiration, not for automatically ingesting their updates.

My previous iteration of this automation was 100% pivotal-sprout based. If you look closely you will see that this automation still invokes sprout. I’ve gone the route of using it as a collection of OSX configurations. I could maintain some of these as shell scripts, but I feel ok having this additional complexity and added dependency.

The configuration provided by sprout is listed in the Inventory.

What Could Possibly Go Wrong

Workstation automation can be extremely flaky and that’s due to the nature of it fetching dependencies from all sorts of locations. This drives home the reason for needing to run it frequently. I can pretty much guarantee that the code that worked a month ago will not work today. Packages change name, or download locations change. This can result in a lot of mistrust of the automation.

Having a good routine of wiping your machine and setting up from scratch is a good way to ensure it all still works. I used to be the type that was proud of how long they could keep their workstation running and would do OS upgrades (Windows, OSX, and FreeBSD). Now I feel much more satisfied by destroying and recreating.

The OSX installer steps is something I’d be willing to copy and paste into my own repository. Vendoring vim plugins is something I’m in favour of doing as well. The principle is that the fewer moving parts there are, the better. Even with what I believe to be a simple workstation setup, there’s still many external facing pieces that will cause failure or tricky bugs to appear.

Attempting this kind of automation seems to be best grown and not copied. If you’re starting from scratch, the first step is running git init in your $HOME dir, adding 1 precious dot file, and pushing that somewhere off your machine.

In the end, I have a setup I’m relatively happy with. It turns out that my implementation looks oddly similar to Gerhard’s, a colleague of mine.

This post still took way too long to write making me think that I haven’t made it simple enough though. There’s still a lot of moving parts and many concepts I didn’t dive into at all (e.g.: what about my data).

For fun, here’s the complete output of the latest run: