This will be easy because I didn’t set any goals last year! It felt great to take a break from goal setting because 2018 was a big year of transition. I moved yet again and I started a new role at work. I then found that it didn’t fit me and I finally had some self awareness to reach out for help and was able to switch roles again to something that suits me at this moment in time.

Here are some things I discovered about myself in 2018:

As always there are so many things I would like to do. I had a dozen blog post drafts that I ended up purging. I need to work on my physical health too. Those who know me know that I have some very specific financial goals. To keep things simple, I’m going to stick with one goal and approach it more like a project. For 2019, I would like to end the year with a published Let’s Play that has at least 50 views of the final video in the series. This ought to be a good test on whether or not game recordings is something worth pursuing.

I’ve sneakily already started on my goal with a completed series of Civilization VI! So far it’s only been shared with a private group of friends.

By-the-way, journaling (goal from 2016) has been the one habit that I’ve cultivated and has lasted several years! Here are the numbers: 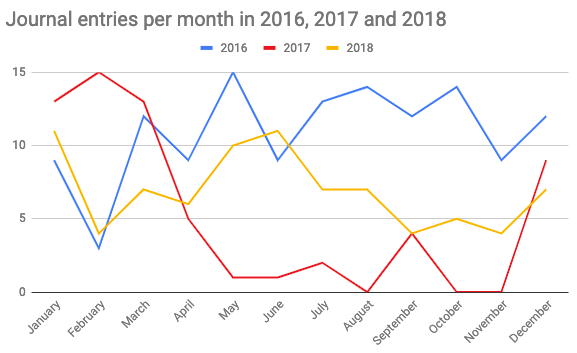