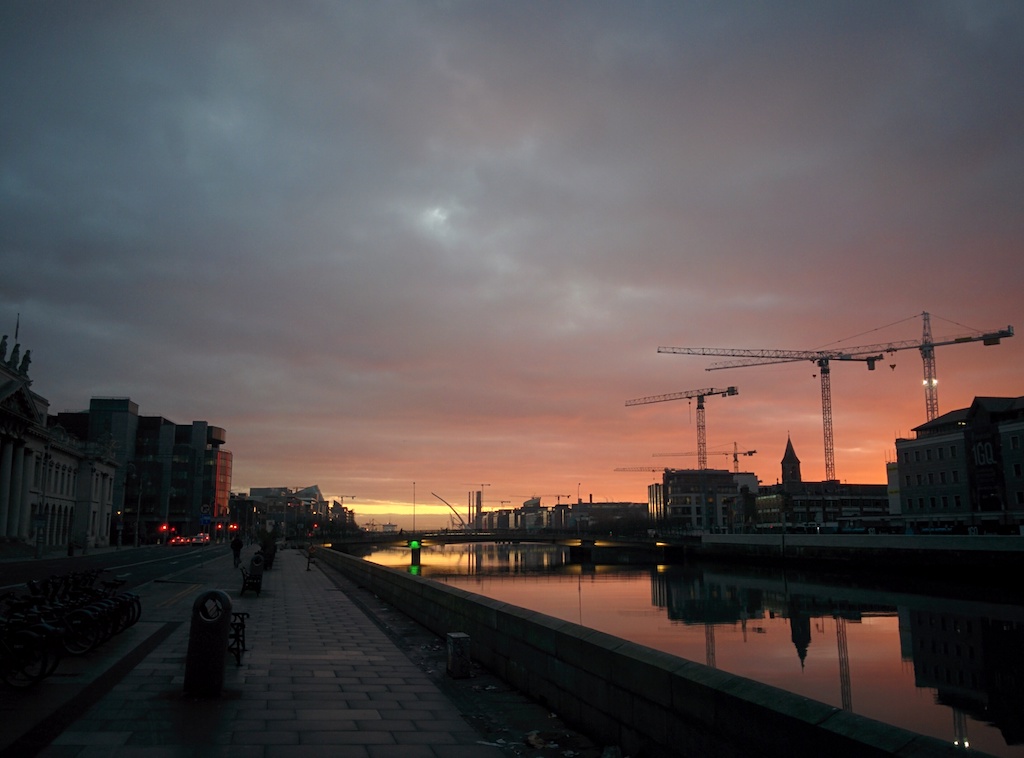 Disclaimer – I was not paid or propositioned to write this post and/or link to the Mitchell & Son web store. I just enjoyed their course a lot. At the end of the course I was given a 10€ discount on any Green/Yellow spot whiskies. I would also recommend the Celtic Whiskey Shop too.

Over the last month I had the wonderful opportunity of learning all about Irish whiskey. It was held in the Mitchell and Son store in The CHQ Building (where I work) so how could I not participate? If you see them offering it again I highly recommend it! Not only did I learn a lot about Irish whiskey, I learned a lot about whiskey in general.

First, a bit of history. It’s quite possible that you are screaming at your screen shouting that I am spelling whiskey incorrectly. Chill out. The word originates from the old Irish word uisce (meaning water). When Scotch whisky became popular the proud Irish introduced ‘e’ into the anglicised version of uisce, hence whiskey. The USA often uses this spelling too which may be because of the large amounts of Irish emigration during that time. What’s very clear is that people do spend way too much time arguing about what is the “right” way. The liquid doesn’t care what you call it.

Three of the evenings had brand ambassadors to do a bit of a sales pitch. At least that’s what I thought they were going to do. What I ended up hearing from them was passion about whiskey and its Irish origins. They enjoyed their competitors products and they were happy to be a part of the booming Irish whiskey resurgence. There was a feeling of disappointment about the world view of Irish whiskey. Scotch is perceived as the ultimate whiskey and that Irish whiskey is only used for shots (and usually only Jameson).

Thankfully, I know better now. The course made me appreciate Irish whiskey, but it made me appreciate the Irish people as well. The course did not have any air of snobbery about it. The presenters gave tips and hints about how they like to enjoy their whiskey but didn’t seem to be too bothered too much if people had other ways of enjoying it. In the end they just wanted people to know that Irish whiskey isn’t just shots of Jameson and a brutal hangover. 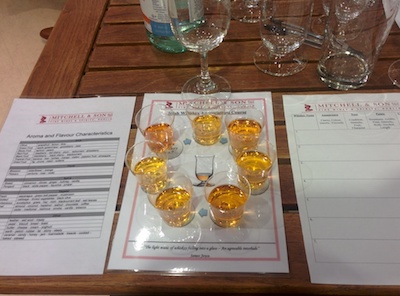 Irish single pot still whiskey is the traditional way of making the spirit. It’s a bit more laborious compared to using a continuous still (aka column still), which some whiskeys in later weeks are made by.

For traditional Irish single pot still whiskey the mash bill is half malted barley and half unmalted barley. The unmalted barley is there because of tax laws the existed in 1795. This tickles the economist in me because I love seeing how financial incentives create innovation (the history of British ales and Belgium beer have similar economic origins). With the tax incentives gone this style of whiskey is still made because the flavour profile became rather popular.

The distilling begins with a fermenting mash heated to a temperature where the alcohol evaporates. The first distillation isn’t pure enough so this gets distilled again. When you read a label that says “triple distilled”, it’s because it was distilled in pot stills and you need that third distillation to really extract the cleanest distilate. Some whiskeys are known and enjoyed for being double distilled, but this usually isn’t by design. It’s most likely because of budget since the extra still does cost quite a bit (again with the financial incentives). 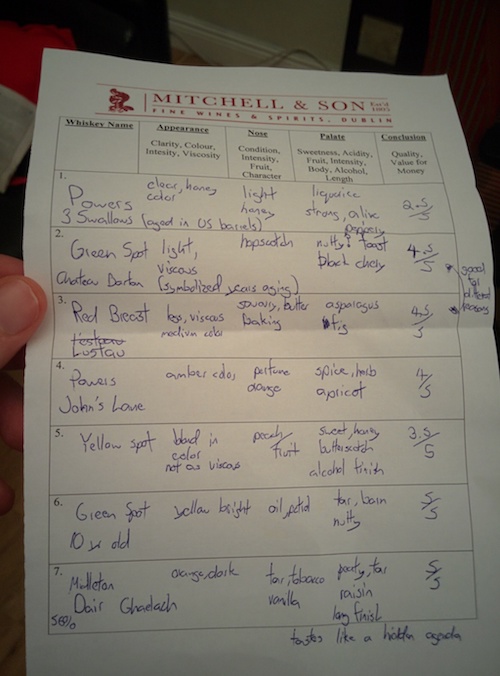 The evening started with a collection of whiskies in a circle. In the period of 2 hours we heard the wise words of Mark McLaughlin. You can instantly tell the guy is mad about whiskey. He does an excellent job of getting you just as excited to experience the whiskey as he is. 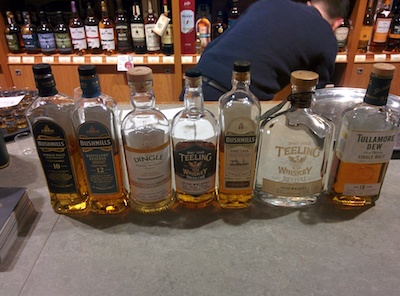 The theme for this week is single malt whiskey. The term “single malt” has become synonymous with high quality. You may even hear people say that they like a nice “single malt” and not mention the word whiskey. That’s how popular and recognized the term has become.

Some individuals think this is the only real style of whiskey and frown upon anything that’s blended. They forget that the word “single” implies that the liquid is just coming from the same distillery. The “malt” part means that only malted barley is in the mash bill (you’ll recall single pot still also had unmalted barley). Blending 100% malt whiskey of different ages is very common. Again it’s a matter of economics as well as taste. Because the business has fairly long feedback loops their finance departments often face liquidity (zing) issues. So when you get a bottle and it says 8 years on the label, that’s just the age of the youngest liquid in the bottle. Master blenders will use their stock to combine different casks of several ages and come up with flavours that can be great and ready for the shelf. 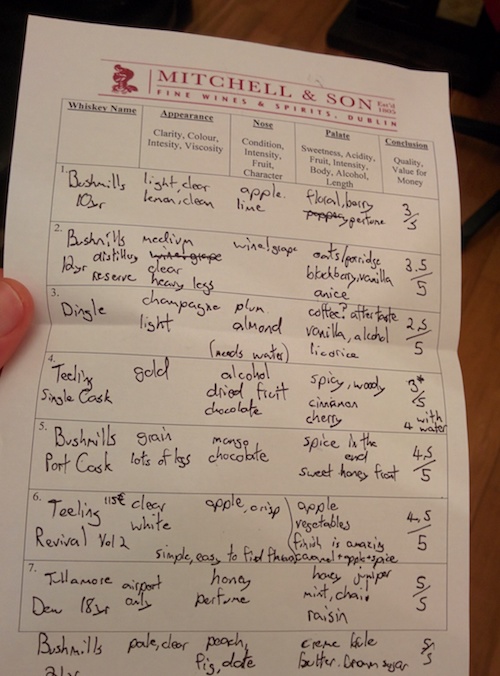 The brand ambassador of the evening was from Bushmills which is the only old time distillery still in operation on the island of Ireland (circa 1784). I really need to get myself up to Belfast for a visit and then a distillery tour up in Bushmills at some point.

You may have noticed an absence of links in a couple of the above whiskies. It turns out that airport duty free stores are a huge market and many brands create airport only whiskies. The Bushmills representive said that 50% of their product turnover is in airports! Such a shame because these two were really really good.

Week 3 – All Grain and Independent Bottlers 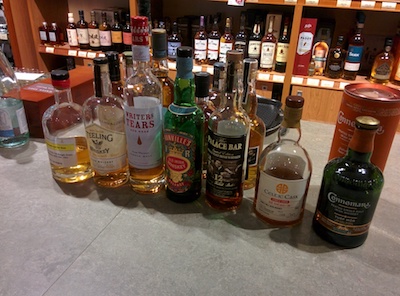 The first couple whiskeys of the evening was a brief tour of Single Grain whiskey. The best I can understand it is that the distillate is made of corn and distilled by column stills. This makes them a bit cheaper to produce and have their own flavour profiles. They are much lighter on the palate and easy to drink. While I thought they were quite drinkable, they didn’t have the bigger flavour that I prefer.

Independent bottlers are a collection of brands that aren’t backed by the big players in the market. What I found very interesting is that the brand of the whiskey doesn’t imply that they distilled the liquid. Since Ireland only has a handful of running distilleries the liquid would only come from them (usually Bushmills but others are upping their production). The independents can then choose their casks and blending strategies to make something unique and distinctly theirs. I’m glad they did because they produced a couple of my favourites! 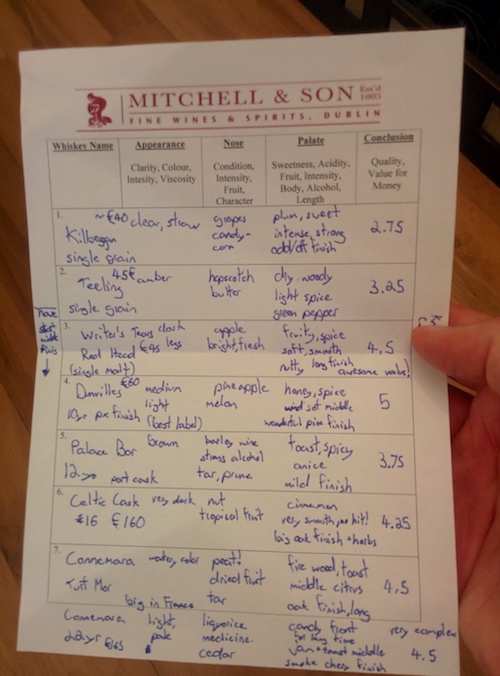 The first two were so good that I bought both of them the next day. 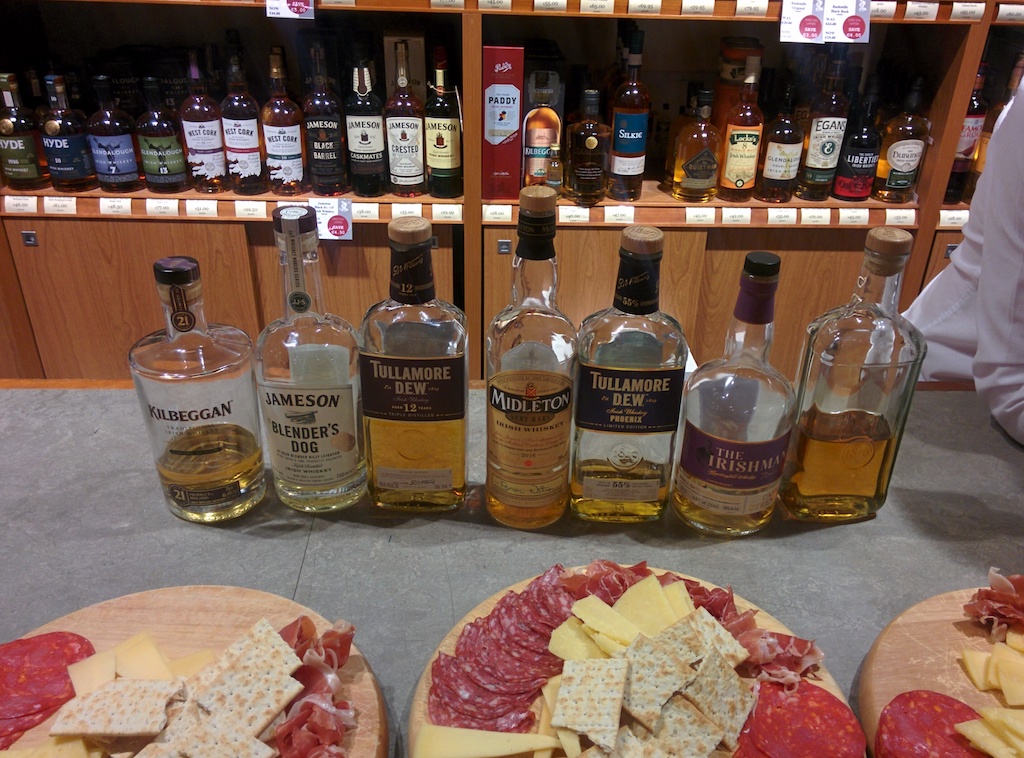 In the single malt section I described a bit of what blending entails. It’s pretty simple to describe, but the execution of the tasty blend is where the skills comes in. Blends are also quite fun to drink because it provides a puzzle for the drinker to disect and figure out the blend composition is made up of. I felt that I was a bit snobby regarding blended whiskies but I’m ready to give blends much more time than before. It’s funny how fickle our opinions can be when it comes to taste. If it doesn’t taste like what you’re used to it seems natural to dislike it. Shake out those preconceived biases and enjoy the drink on its own. Easier said than done.

The final week was extra special because the tastings were done blind. I loved this because it makes biased opinions a lot harder. I would like to taste more whiskies this way. Something to keep in mind is that every single whiskey is very good. None would be something I wouldn’t be able to finish a bottle of. My scores just help me decide which of these fine whiskies I should spend my money on. 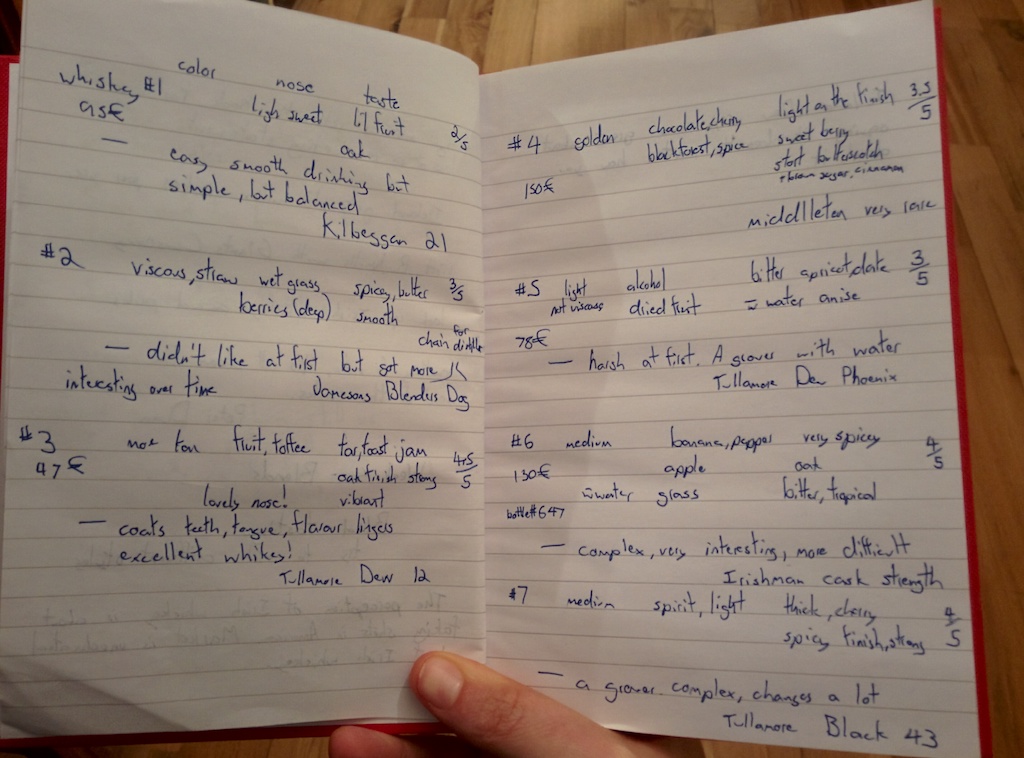 The representitive for this week was from Tullamore Dew. I enjoyed his easy going nature and his more laissez faire attitude about how to drink whiskey. Seemed like someone that would be fun to go out for drinks with.

The course was well worth the 160€. Now I’m happily building up a small collection of my favourites. Because of this course I feel that I am getting much better value for the money spent because I am purchasing the whiskeys that best fit what I enjoy. I wouldn’t complain about any of the whiskies I tried, but when it comes to spending your hard earned cash, it’s nice to know a bit about what you’re getting. Now I just need to add the Red Breast Lustau, Tullamore Dew 12 and the Teeling Revival Volume II and I’ll have a collection fit for any occasion. Ok, I still need something peaty like a Connemara too. 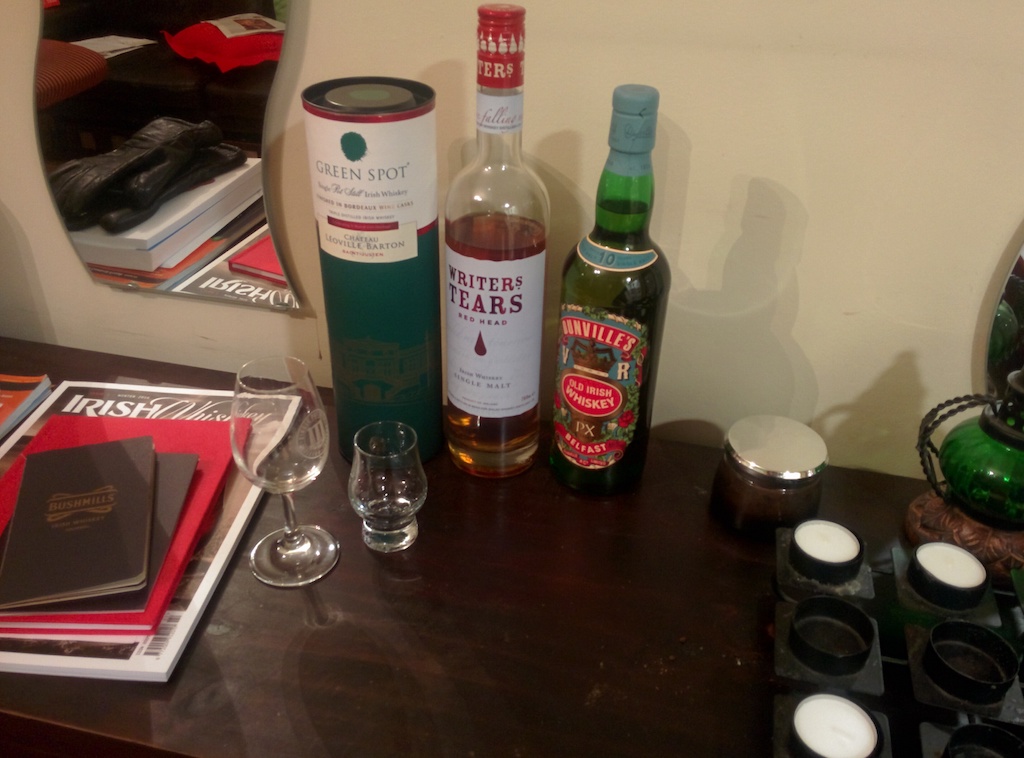