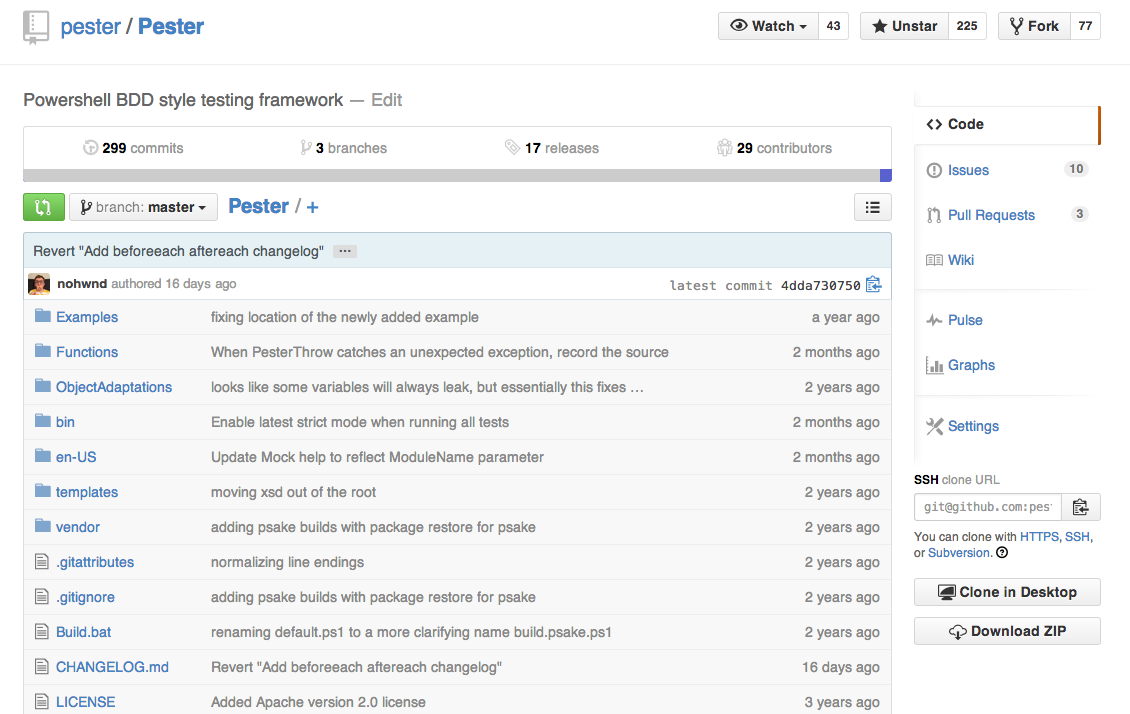 In 2010 I was on a project that focused on build and release software for a bunch of .Net projects (and a few Java projects). Our “glue” was written in PowerShell because of the wonderful remoting capabilities and it’s integration with Windows automation. Our code was untested and our code base was growing over time because our tools proved to be useful and we were getting more and more feedback. Thus, the code required change more frequently. Without the safety net of tests for the most basic logic, our feedback loop was slow as it required us to run builds and deploys to adequately cover our bases.

It was January 1st, 2011. I was a touch hungover from the previous night and was chilling in my apartment in Calgary. The difficulty in changing our PowerShell code was bothering me enough that I got a bunch of coffee from Cafe Beano and attempted to make an rspec like testing tool for PowerShell. The next day I was able to make a commit with actual working code! A few days later I was able to add tests to PowerYaml. That’s how Pester was born.

In the next couple months I integrated Pester into our project. It was a real superficial integration as we didn’t have too much time to retroactively add a lot of tests. So for me, my consumption of Pester was a few months in early 2011!

Over the course of the year, the tool seemed to be adopted by a few. A friend in Vancouver apparently had begun using it in one of his projects. He’s also the first contributor to the project! It wasn’t until the next year that Rob Reynolds (aka ferventcoder) used Pester in the Chocolatey project. That was my first hint that there’s potential in this project.

In 2012 there wasn’t much going on until Matt Wrock added mocking support and contributed a whole lot of fixes. It was then that Pester got a new core maintainer. It was very cool to meet him during my career break in Seattle and give him a proper thank you for the work that’s done. I believe he also wrote the earliest post on Pester. I then noticed a comprehensive post on the endjin.com blog website.

Seeing other people use Pester was a massively ego boosting thing. I’m afraid I’m one of those people in the software community that does feed off of this kind of thing. For some reason it made me feel validated as a professional in the software community. Despite the pleasure I got from Pester being associated with me, I decided to move Pester from my personal github user to a Pester organization. I’m really happy I did that, because it made it feel more like a community project than a personal one. A google group was eventually created too as to not clutter Github with conversations in the issue tracker.

Later on I would find out that it’s been used in several ThoughtWorks projects! These use cases weren’t even initiated by me. Someone wanted to test their PowerShell code, found Pester, and started using it. They would find out I also worked for ThoughtWorks and would ping me on our internal chat and ask me questions.

While I was living in India I had several months with some extra time that I used to update Pester. Throughout the year I spent quite a bit of time maintaining the project. There definitely was a motive for this activity. I knew that projects that have activity in the codebase are usually favoured by other devs. I still haven’t used Pester on a project since early 2011! There’s no functionality that I could possibly need out of Pester but I carved out time to take care of a few niggling design flaws and close some issues. This resulted in a major release which is pretty much the last time I really did anything to the code. It was great to see another quality blog post by Johan Leino appear on the Web.

2014 marked a large surge in Pester interest. During the PowerShell Summit it was rumoured that the creator of PowerShell, Jeffrey Snover, mentioned Pester in one of his talks! Heck, I was even interviewed for the PowerScripting Podcast!

Another contributor by the name of Jakub Jareš was very active and soon became a core member of the Pester team. During my travels on my career break I got to meet up with him in Prague! He also wrote a couple great articles too.

Now it looks like there’s another one joining in too. Welcome Dave to the Pester team!

Looking at the logs of the Beta branch, it’s wonderful to see my commit percentage diminishing. I’ve now only committed 30% of the code base!

Though not a big project, I can say I learned a lot maintaining this open source project. There’s something very different than working with a colocated team and random contributors around the world. Colocated teams develop unwritten rules (a culture) and there’s less debate over small issues. I didn’t realize how much brace alignment, trailing whitespace, tab stops, and other petty things would annoy me. What’s harder is that I didn’t want to complain about it to the community afraid that I would come across as an OCD control freak. My biggest mistake with Pester was thinking too much on how it reflected upon me, and not what is good for the community. If I had lived and breathed Windows projects over the last few years, I think that would have been different. I’m happy that Pester has a few excellent maintainers now and that I’ve participated in an open source project from first commit to stepping away.

Another lesson was that empowering would be contributors was an investment well worth doing. It’s hard to say, but I feel that doing this is what’s enabled me to lessen my involvement over time.

This talk also resonated with me a bit (the last 4-5 minutes):

The adventure of watching a project grow and have a life on its own has been a wonderful experience. Looking at the project history and correspondance it’s pretty easy to see that I’m not nearly as active. That’s really thanks to Jakub and Dave doing nearly all the maintenance.

That being said, I’m “officially” stepping down and retiring from Pester. This will be done by unsubcribing from any e-mail notifications (the google group, and the github project).

I would like to shout a big thank you to everyone who made this project so wonderful. Especially to Manoj Mahalingam who did some great work in the early days and really helped me get this project off the ground. Another shout out to Stefan Vant for the excellent logo!