Developers like to talk about being in a state of flow. This is when time just seems to fly by and you’re writing more code in a few hours than you do in several days when you’re not “flowing”. While I think flowing can be postive, it often can do more harm than good if going on for too long.

In the past I would complain that the environment around me kept me from the flow. I would look forward to the quiet times in the office when I could zone out for hours and complete some wild and crazy code I was working on. Many times I would return the next day and realize that I could have done it simpler, or there were many other aspects of the problem that I didn’t take into consideration. One of the biggest complaints about flow is that it takes a long time to get into that state. How can we minimize this time, and keep these flows shorter? 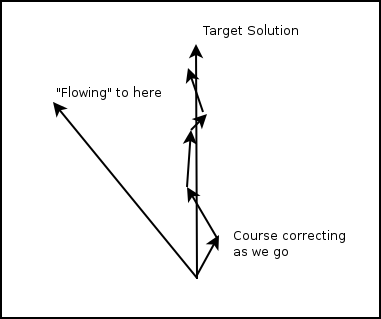 What I found myself needing were breaks. Brief moments to reflect on the past bit of effort and reflect on what work was done and where it’s heading. Many times this has resulted in an “aha” moment and see that my path is not going towards a solution that is best for the project. It’s also a good time to check your assumptions. You may be flowing towards a dead-end because of something a little bit of planning could have prevented. Like the diagram to the right suggests, flow can result in effort that’s far from the solution, whereas the small bursts follow a “truer” path. After the flow session is it easy to get back on track? Sometimes it’s best to simply eliminate all you’ve worked on and start from scratch.

This leads me to spiking. Getting into a flow can be useful when performing a spike. It can reduce the spike time, but is it really possible to flow when working on something you don’t have any clue about?

When programming solo I try my best to always practice the pomodoro technique. There have been so many times that the break (and I try to be disciplined about stopping when the timer goes off, even when I’m in the middle of something) introduces new ways of tackling the problem.

When pairing I experience similar gains with breaks. I never considered this technique when pairing, because I always thought that the practice already mitigated the risks I mentioned earlier. That may be true, but thanks to Paul Daigle, I found that it was just as effective when pairing. It’s even better because you have someone to reflect upon the pairing session with. A quick time away from the code is a good time to recall what problem you’re actually trying to solve and whether or not the direction you’re going is actually going to lead you there.

If you’re leading a technical team and you see everyone glued to their monitors and typing franctically, you might think that they are “flowing” and working at a heightened level of productivity. Think again, they could possibly be racing towards the wrong direction. A team that’s moving around, going for walks, taking 5 to do a tabata to me is a sign of a more switched on team.