Since my train didn’t leave until after noon, I decided to go back to Bletchley Park and spend the morning there. It was so nice to just spend some idle time in the park and not hurry through the exhibits. Unrushed, I made my way to the train station for a direct train to Glasgow. Upon arrival at the station I was greeted by Derek and Rose who I know from back in the Calgary days. They’ve been super generous and hosting me at their apartment which is close to the train station. It was fun to look back at the tough project we worked on together and look at the experience with fondness and nostalgia. Rose was my concert buddy and Derek was probably the only person I know that likes Green Porno as much as I do. 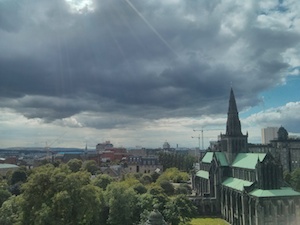 During my first day I wandered around the city center and then went up to the Necropolis. It was a beautiful place and had a view over the city. Had I been more prepared I would have spent more time there in search of graves of noteworthy people. On my walk back to the apartment I saw an e-mail from the company that chartered my cargo ship cruise. Apparently BBC’s Travel Show was looking for people to interview! I got in touch with someone from the BBC, and was scheduled for an interview the next day. Update The interview is online now.

The next day I spent the morning doing laundry, and then walked over to the BBC for the interview (the clip is online now). The camera man was a really cool dude named James Allen. He said he enjoyed the interview because it was a break from more monotonous stuff he was doing earlier in the day (filming people cooking). Of course I had to talk about my CBC experience with him and he revealed that he’s in a band! They are called Mummy Short Arms, which is so fitting given the pun I posted on Facebook the day before! After the interview and lots of walking, I met up with a bunch of ThoughtWorkers for dinner. It became very clear to me that evening that I miss ThoughtWorkers a lot, but ThoughtWorks not as much.

My last day was spent on a day trip to Edinburgh. People have always said that it’s a beautiful city and they are right. It was more beautiful than I expected and spent the day taking a couple tours. A big thank you to Rose for telling me about Sandeman tours. I did the following: 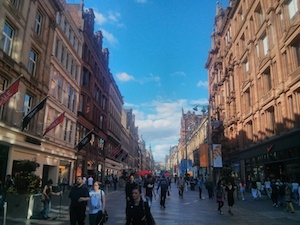 I was sad to leave Scotland because it’s such a friendly place. Unfortunately it’s also expensive, although I guess it’s cheaper than London, but that’s not saying much.

I had to wake up at 3:30am to begin my trip to Berlin! The interary was a bit complex: Glasgow –> London –> Brussels –> Koln –> Berlin. Here I was going to stay with an ex-ThoughtWorker, Phil Calcado. The interesting thing about Phil is that I barely know him! I had a couple beers with him the year before, but he happily hosted me in his awesome flat for several days. I eventually made it to his place at around 11:00pm (I didn’t quite navigate the Berlin metro optimally that evening). There was a little SoundCloud gathering going on and another ex-ThoughtWorker, Tom Czarniecki, was there too! It seems the world has ThoughtWorks affiliates everywhere.

It appears I timed things well as I got to be in Germany for the world cup final! Myself and Phil went down to Prater Biergarten. Tom joined us a bit later. Then for some odd reason, I got interviewed by a Mexican journalist. I’m not making it up, because Phil and Tom will vouch for me. The whole city turned into a party and we stayed out til around 4:00am. I still can’t get the Uber Deuchstland song out of my head.

Like in Edinburgh, Sandeman does tours in Berlin. I did these three: 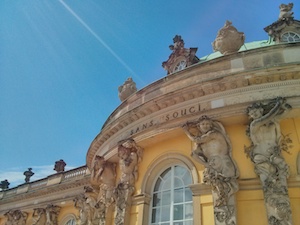 Before I left I had one more evening of beers with yet another ex-ThoughtWorker, Daniel Temme!

Travel from Berlin to Heidelberg was a direct train. I made my way to my airbnb and got settled for spending some time in this beautiful town. I purposely planned to have a free day before the F1. I wandered throughout the old town and the castle. My favourite thing about this part of the trip are the picnics I had; the top one being on a bench in Philospher’s Way. The weather was so hot that I didn’t really want to stay inside a restaurant, nor a patio. It was really nice to simply purchase some groceries and wander around looking for a nice spot in the town to eat. 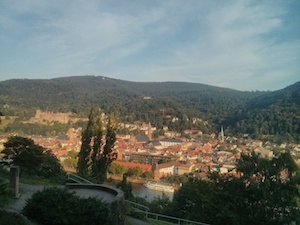 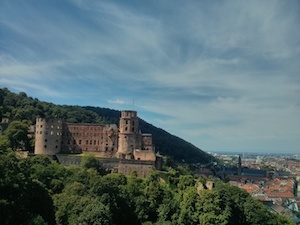 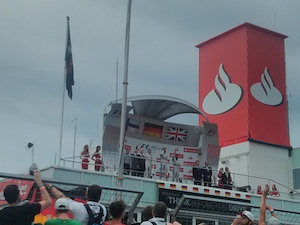 Getting to Hockenheim was pretty straighforward. There’s a bus from the train station, or I can take a train with a single connection in Manheim. The race weekend was super hot with the air temperature around 35C and they said the track temperature was around 55C! I need to learn what exactly track temperature means, but I’m guessing it’s how hot it is in you’re sitting in the sun.

So far this race is where I’ve had the best seats. I was amazing to actually see the cars start the race and watch them go through the first turn. It was scary to see Massa’s car flip during the start of the race but was relieved to see him walk out of the car. The picture here is a first for me; I actually made it to the podium area for the awards ceremony!