Upon arrival in Antwerp I saw my taxi from the deck. I had all my belongings ready and made my way down to the port. The ship crew was busy with the offloading of containers so I decided it probably wasn’t a good idea to disturb them to say farewell. It was a long drive to the immigration office, and there I found out that I needed a passenger manifest to get the stamp of approval. This meant going all the way back to the ship and back. This added around an extra hour of taxi travel. The chief mate was ready for my return as he had the document in his hand. After that confusion, I made it to central Antwerp and found a hotel near the train station.

Antwerp is a fairly small city. The port area takes up more space than the actual city. After a quick nap I wandered around old Antwerp and in the evening found a little pub. I ended up having more drinks than necessary with a couple that were a lot of fun. The lady has been in the shipping industry and even knew the ship that I came in on! 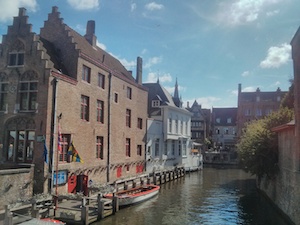 The trip from Antwerp to Bruges was pretty easy. As was finding the residence I was going to stay in. The house was just outside the old town so after getting some travel logistics out of the way I set out to do a walking tour.

Bruges is one of the prettiest towns I’ve ever seen. It’s like a snapshot in time of Belgium several hundred years ago. In some spots it was insanely crowded, but in other spots it was quiet and peaceful, which made me stick to those areas. When I got back, I met Lander, the host of the house. He was very personable and enjoyed conversing with him about my travels.

The next day I did another self guided walking tour. My favourite moment was just relaxing having a couple beers at the oldest tavern in Bruges. After a full day in the town I went back to the house where Lander invited some friends over for the game. We then headed out to watch the Belgium game in the town square. It was so much fun! I lost the group for a bit so I gave my round of beers to some random strangers in the crowd. That seemed to make people happy. Next thing I know it’s 5:00am and I’m chatting away with a fellow drunk.

These are the beers I had in Belgium:

Of all of these, I would say the Tripel Karmeliet and Orval were my favourites. There are so many beers to try that I really want to come back and spend several weeks sampling all the wonderful beers. There’s something about a country where the monks participate in the brewing process. The day before I got to Bruges, the De Halve Maan had a priest come in and bless their new brewing equipment!

The next leg of my trip is to Dieppe, France. Unfortunately I woke up hungover and slept through my alarm. This meant I missed my train which had the best connections to Dieppe. Armed with the Eurail app, I tried to make a new itinerary. Due to my decisions of last night, I slept through my connection and passed Brussels. Turned out it didn’t really matter because at the following station I learned it was the first day of holidays in France and all reservation trains were booked. Using the app, I figured out an itinerary that could get me to Dieppe without reserved seating. One of the trains was delayed and I just made my only connecting train with only a minute to spare. Last part of the journey was the walk to to where I stayed. The only issue was that I forgot to cache the map, but at least I had a star showing where it was and functional gps. 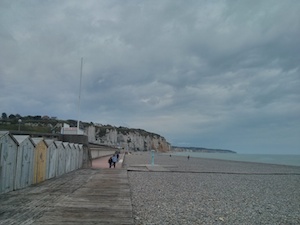 My primary motivation for visiting Dieppe was to see the beaches the Canadian troops attempted to invade in WWII. The invasion of Dieppe preceded D-Day and was used as an information gathering invasion. Essentially they learned a lot at the expenses of thousands of lives. I’m not a patriotic person, but I couldn’t help but feel moved by the lives that were lost there. You can read more at Wikipedia (notice that my picture of the beach is very close to the image in Wikipedia!

After my walk about, I walked some more! I headed down to where all the restaurants were and had a nice meal and then proceeded to hang around the beach area to catch the sunset. It was definitely worth it. 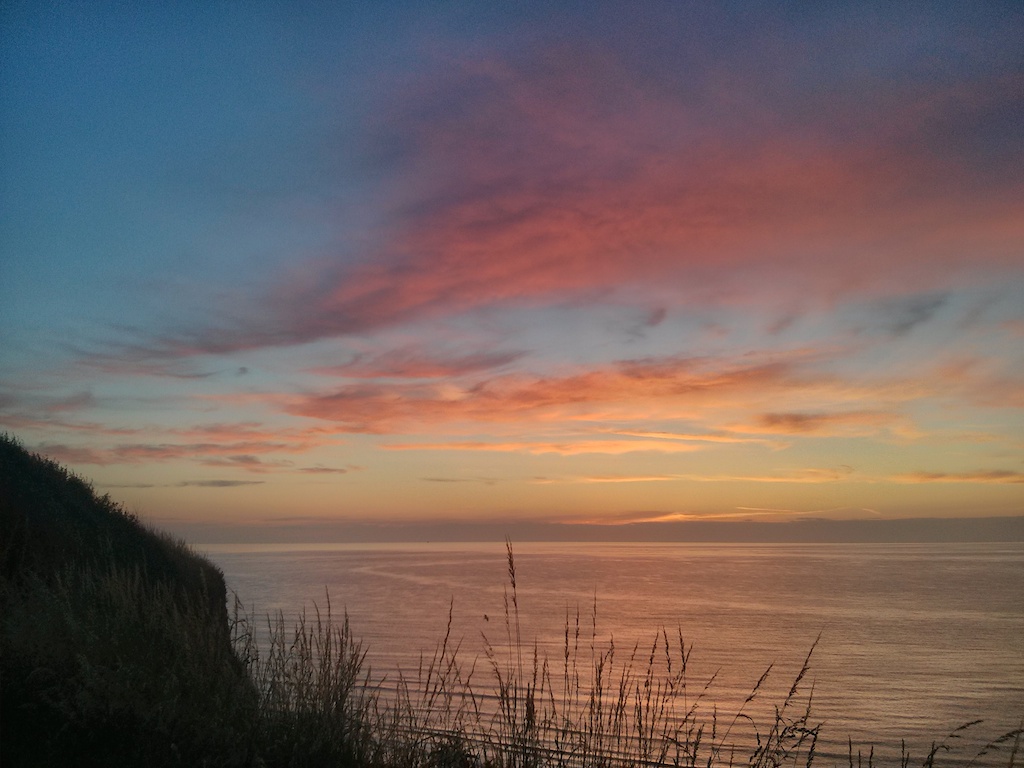 At 3:30am I left the residence and walked to the ferry terminal. Luckily I walked there the day before so I knew how long it would take, and that I had to be there at 4:30am. I wasn’t initially planning on being there that early so I’m glad I did my exploratory research. The ferry was pleasant, but spent the majority of the journey falling asleep and hitting my head against the window.

The ferry arrived in Newhaven on time. I had a nice chat with the immigration officer who supported my goal of seeing all the Formula 1 races. I got my luggage and took a series of trains to Hitchin where I met up with Mark, a old ThoughtWorks colleague. It was quite refreshing to see a familiar face!

My next few days were lunch and dinner plans with people I know in London. I got a chance to talk about where my mind is at regarding my future. It was also nice to see more familiar faces. I really like London, but all the tubing around I was doing unfortunately left me with a cold before I left.

This was to be my face for the first F1 on my trip. My hosts picked up from the train station. They were amazing hosts and were very pleasant to talk to. I had a lot of fun talking shop with them as they run an IT business in the city centre. Their son is also note-worthy as he created Homebrew!

The city of Milton Keynes was interesting because it was a planned city. It was easy to get around, there were plenty of trails that made walking around the periphery quite pleasant.

This Place is the Bombe!

I planned for a free day before the race so I could visit Bletchley Park. It was such an amazing experience to see where Alan Turing worked and observing a working Colossus, WITCH, and Bombe machines (in the National Museum of Computing)! While visiting the grounds it made me think about NSA’s involvement in security. If the NSA had a facility that celebrated its ability to crack codes, I don’t think people would have the same feeling. WWII was great a creating a binary view of activities. Bletchley Park was also dismantled after the war. I guess things were simpler and less ambiguous then.

Here’s what the Colossus sounds like! I wish I recorded a lot more audio because I can hear a song wanting to come out. 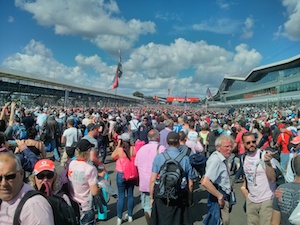 The commute to the track was quite reasonable, but Friday was a bit much for me as I was in the worst part of my cold. Saturday had the most comfortable weather and I spent a lot of time at the track enjoying different vantage points. Race day was a big spectacle as it was the 50th race at Silverstone. Before the race there was an air display by the Red Arrows. It was far better than I had expected. Afterwards I went up to me seat and watched a great race. Lots of drama on the first lap as Raikonnen had an accident. This red flagged the race as they had to repair a barrier on the track. The rest of the race was rather uneventful, but the battle between Alonso and Vettel (below) was a show of great driver talent. It was a shame Roseberg had a malfunction because the battle for 1st could have been just as great.

The journey continues to Glasgow, Scotland! The write up for that will have to wait though as this post is long enough. I was going to write about my learnings over the last few weeks, but will hold that thought for a bit.